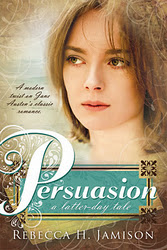 Eight years ago, Anne Elliot broke Neil Wentworth's heart. Bowing to pressure from her parents and her own fears Anne broke off their engagement after one day. Never expecting to see him again she is shocked when his brother Jack buys her father's house. When her roommate Marcy tells her that Neil is still single Anne is surprised.

When her sister Mary is put on bed rest, Anne stays with her after work to help with her nephews. While Anne is at work Mary's sisters-in-law Lily and Hannah Musgrove are helping her. But with Neil dating Lily, Anne finds it difficult staying with Mary and seeing so much of Neil, especially since she still has feelings for him.

One night at dinner with the Musgrove's, Lily asks Anne to join them on a trip to North Carolina, Neil is taking them all down before he has to goes back to work. Anne finally agrees to go along with them.

While there they visit Neil's friends Dave and Valarie Harville and Jay Bentley. As they share dinner Anne and Jay sit together and enjoy talking to each other. The next day Lily, Hannah, Anne, Neil, and Jay all go down to the beach. There are jellyfish warnings against swimming, but Lily is determined to swim in the ocean no matter what. While the others build sand castles Lily is stung in the neck by a jellyfish. As Neil brings her in Anne calls 911. Anne rides in the ambulance with Lily and stays the night with her at the hospital to keep Lily as calm and comfortable as possible during the night.

The next day Will Grandin offers to drive Anne back home, but Neil says it is not necessary because he has to go back too. Anne is so tired that she sleeps the whole 7 hour drive home. Then she and Neil have a little something to eat in her kitchen as they talk for awhile before Neil has to leave for work.

When Anne gets a bouquet of red roses at work she has no idea who they are from – the card is signed Will Gradin and requests dinner on Friday night. Will is takes Anne to a political function dinner.

The following Friday Anne and Will go to a party at her Dad's apartment when she will meet her dad's new girlfriend – Felicia. The “party” at her dad's is a selling party. Suddenly Liz bursts into the room and says that Dad lost his job and he would soon be home. Will offers to help him and they type up his resume on the spot.

Will and Anne have been dating for about a month when Anne gets the flu. Neil brings over some food for Anne. He then offers to pick up up Marcy at the airport. Marcy then tells Anne that Liz told her and Neil all about Anne's romance with Will. Anne denies it and admits that she still had feelings for Neil. Marcy tells her if she wants Neil to know how she feels she needs to let him know.

But when she tries to break up with Will, he won't accept that she doesn't love him. Will then begins stalking Anne. When Neil comes over to see Anne, he takes her to the local police station to file a report. Will then takes Anne to dinner and she admits her fear of getting divorced as her parents had. As they talk Anne feels as if she and Neil still have connection. But when Will starts following Anne when she is with Neil, their date ends on a disappointing note. But to make sure she is safe Neil has Anne and Marcy stay in his house with the Harvilles. Neil spends the night in his SUV keeping watch.

Rebecca Jamison creates a wonderful blending of Jane Austen with the modern world in this delightfully entertaining retelling of Persuasion.

A Digital ARC was provided by the publisher for the sole purpose of reviewing this book.

First off Rebecca, I'd like to thank you for taking the time to answer a few question about Persuasion: A Latter-Day Tale. I'm sure your reader will be interested in learning a little more about both you and your book.

1) First I'd like to ask if you are a Jane Austen fan or are you just a fan of Persuasion?

I am a huge Jane Austen fan.  About seven years ago, I decided to re-read all her books. That’s when I discovered that she had a book called Persuasion, which I’d never read. After I read Persuasion the first time, I went right back to page one and read it again. I became a little obsessed with it—to the point that I was reading passages out loud to my husband and children. I also started editing it in my mind for the modern audience.

2) When you started writing Persuasion: A Latter Day Tale had you already decided to modernize Jane Austen's work or did the work just fit into this pattern on its own?

After I read Persuasion a couple times, I thought, “Someone should do a modern version of this.” But I really didn’t want to be the one to do it. I never saw myself as the type of person to write a romance. Still, the ideas kept coming into my head. So I said to my husband, “I really want to write a modern version of Persuasion. The problem is I don’t think anyone will want to publish it.” He encouraged me to just go ahead and write it for fun, which is what I did. I’m still a little shocked it’s getting published.

3) Which character do you most relate to? Why this character?

There’s a little piece of me in every character, but some definitely have more of me than others. I relate to Anne because like most women, I’ve played the doormat and struggled with self-doubt. I also relate to Mary because I’ve been a frazzled mom of small children. If I have to pick one, I probably relate to Anne the most because I spent so much time exploring her emotions.

4) How much of yourself did you put into Anne?

I struggle with self-doubt, taking risks, and learning to say, “no.” You’ll see all that in Anne. On the other hand, my family situation is totally different, and I was never afraid to get married.

5) With the current interest in everything Jane Austen and America's curiosity about the Mormon lifestyle (because of the Presidential Primaries) is there anything in particular you hope your readers will come away with when they read Persuasion?

Back when I started writing six years ago, Jane Austen was very popular, but not as much as she is now. Last year, after I submitted my manuscript to my publisher, I attended a stage production of Persuasion and was shocked at how popular it was. After I signed my contract, I was surprised to notice people reading Austen’s Persuasion in waiting rooms. So, my timing was lucky that way. I’ve noticed that a lot of people who’ve read my book decide to go read Jane Austen’s original. That makes me happy.

When I first started writing, I thought so many of Persuasion’s themes jived with Mormon or LDS culture, so I made the characters LDS. I never thought anyone who didn’t belong to the Church of Jesus Christ of Latter-day Saints would want to read it. It was never my intention to convert anyone to my way of thinking. While I was writing, I read a lot of Christian Romance novels. They inspired me to be more open about LDS religious practices. I wanted to share the challenges of living the gospel, not just the blessings. I probably would have written it differently if I’d known that so many people outside my church would want to read it. As it turns out, everyone will get an insider’s glimpse. Hopefully, the glossary will help a little here and there.

6) Are you planning any other modernized Jane Austen inspired works in the near future?

Right now I’m working on Emma: A Latter-day Tale. I’m having a lot of fun with it.

7) As a writer is there a question you are just waiting for someone to ask you about your craft? If so how would you answer?

I’d like to say something about the point of view I chose. A few months ago, I read a blog post that said writers should avoid using first person point of view (meaning a character speaks directly to the reader using “I” instead of having everyone be a “he” or “she.”) I totally disagree with this opinion. I actually wrote the first draft of Persuasion in third person (all “he” and “she.”) When I changed it so that Anne was narrating in the first person, her voice shined through. She became a little more alive for me. Writing from Anne’s point of view increased the feelings of mystery and suspense. It was also easier to empathize with Anne and see why she couldn’t show her true feelings.

Again thank you for your time today and for providing us all with an inside look.

Be sure to post a comment to be entered in the Digital Book Giveaway. Comments posted from February 12th - 19th will be eligible for the giveaway! Giveaway is open worldwide. Thanks to Cedar Fort for providing this chance for one lucky poster!

Check out all the stops at the following link:

Rebecca Jamison says...
Thanks for hosting my blog tour and interview!


It was a pleasure getting to know you!

Reply Rebecca Jamison
5:44 PM on February 12, 2012
Thanks for hosting my blog tour and interview!