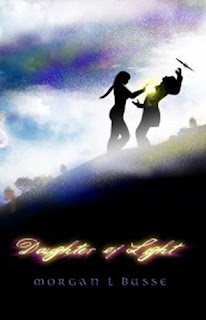 Daughter of Light opens with a woman running for her life.  A woman, named Mercia, who is trying to save the life of her daughter by getting to the White City.  But her time has run out...

Approximately 20 years have passed since Mercia's attempt to reach the White City when we are introduced to Rowen Mar, Captain Lore, Caleb Tala, and Nierne - four very different people from the various corners of this world.  Rowen has just lost her father to war.  Captain Lore is Captain of the Guard for Lord Gaynor Celestis, High Lord of the White City.  Caleb Tala is an assassin for his cousin Lord Corin. Nierne, a scribe at the Monastery of Thyria, was rescued by Father Roth when she as a child.

When a mark appears on Rowen's hand she is accused of being a witch and exiled upon pain of death should she ever return to Cinad.  When she is offered a position as varor Rowen is provided a means to escape the village that has just thrown her out.  But to become varor for Lady Astra will require training - physical training.  Can Rowen keep her mark and her frightening power a secret?

Captain Lore, tasked with overseeing Rowen's training, is puzzled by Rowen's demeanor.  He senses that something in her past has hurt her though he doesn't know what.

Meanwhile in Thyria something evil is moving in, an evil that most had forgotten had ever walked the land. An evil known as the Shadonae who bring with them the Mordra.  Only by calling upon the Word does Nierne survive the utter destruction of city.  With the only possible hope for stopping this ancient evil lying in the White City, Father Rath and Nierne are tasked with the mission.  But they are being hunted by the very beings they are hoping to stop.  Do any Eldaran yet live or has Nierne taken on a hopeless quest?

As the Temanins take their war to the very walls of the White City, Caleb is determined to destroy, in one night, the power of both the White City and that of Avonia.  Caleb's attack forces Rowen to use the powers that she has been hiding.  Will the White City now, out of fear, turn on the one person that could save it from the danger it will soon face?

To be perfectly blunt there is no way to review this book to do it justice to it without giving too much away.  I just finished up the CSFF blog tour for Patrick Carr's A Cast of Stones and The Hero's Lot and other tour participants were commenting on how little Christian Speculative Fiction is written for adults, well here you go!

This book has all the elements you could want.  A misunderstood outcast.  A heroic figure who calls upon God.  Danger.  An impossible mission (several in fact).  A closely guarded secret.  A hero is disguise.  A chance at redemption.  A world in the balance.  And a touch of romance.  Something for almost everyone.

The characters are an intriguing and compelling group.  Some you develop a fondness for, others you would run the other way if you saw them coming.  Daughter of Light  drew me in and held my attention to the very end.  Looking forward to reading book 2 Son of Truth sometime in the near future.

I was provided a digital copy of this book for the purpose of honestly reviewing it for this blog tour.

Be sure to check-out all the TNT tour stops:

What if with one touch you could see inside the soul?

Rowen Mar finds a strange mark on her hand, and she is banished from her village as a witch. She covers the mark with a leather glove and seeks sanctuary in the White City. She lives in fear that if she touches another person, the power inside her will trigger again, a terrifying power that allows her to see the darkness inside the human heart . . . But the mark is a summons, and those called cannot hide forever. For the salvation of her people lies within her hand.

About the author: Morgan L. Busse writes speculative fiction for the adult market. She is the author of Daughter of Light and Son of Truth, the first two books in a series from Marcher Lord Press. Morgan lives in the Midwest with her husband and four children. You can find out more about Morgan at www.morganlbusse.com.