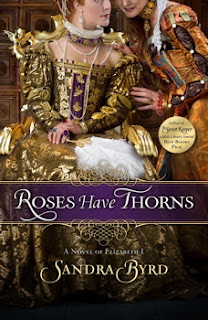 A Novel of Elizabeth I

I have never read Sandra Byrd's work before, though I have to admit wanting to so this blog tour was the perfect time to acquaint myself with a new (for me) author.  I have read other books about Elizabeth I in the past as my mom has been a Tutor / Stuart history buff and I had easy access to this titles through the years.  Roses Have Thorns is definitely an excellent addition to the library of anyone interested in this time period.

Roses Have Thorns captured my attention and held it the end.  I wanted to know what happened to Helena (Elin) Snakenborg and how her adjusted to life in Elizabeth's England after leaving her home and family behind in Sweden.

Elin is betrayed by both her sister and her fiance just days before she is to leave for a short trip to England.  When Elin is offered a chance to stay in England and serve as a lady in Elizabeth's court she takes the opportunity it offers - a new life, a new country, and perhaps a new fiance.  But as Elin soon learns a new name in a new country does not create friends.  Only when she proves her loyalty to the crown at risk to her own life is she accepted and forms friendships within the court.

But betrayal surrounds Elizabeth and hidden threats can rise up at any time.  Any piece of information could be vital to save the life of the Queen.  But when choices of the heart or loyalty to the crown threaten her marriage what will Helena decide?  To whom does her heart belong?

As England's religious future hangs in the balance, Elizabeth and Helena must decide where their hearts will lead them.  Roses Have Thorns is the story of Elizabeth's England seen through the eyes of a woman who chose to make Elizabeth her queen and England her home.

Helena's love and her passions drive her loyalty as does the memory of her own betrayal.  Take a journey of a lifetime with Helena and rediscover England of the sixteenth century.  Fall in love with England of old.

Roses Have Thorns was an enjoyable reading experience and I would highly recommend it to any history lover or royalty enthusiast.  It is a lovely way to spend an evening or week-end.  I will now have to read the first two books in the series.

I was provided a copy of this book by the publisher in exchange for my honest review. 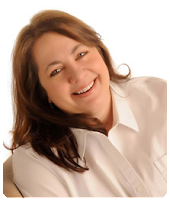 After earning her first rejection at the age of thirteen, bestselling author Sandra Byrd has now published more than forty books. Her adult fiction debut, Let Them Eat Cake, was a Christy Award finalist, as was her first historical novel, To Die For: A Novel of Anne Boleyn. To Die For was also named by Library Journal as a Best Books Pick for 2011 and The Secret Keeper: A Novel of Kateryn Parr, was named a Library Journal Best Books Pick for 2012. Roses Have Thorns: A Novel of Elizabeth I, will publish in April, 2013.

Sandra has also published dozens of books for tweens and teens.

A former textbook acquisitions editor, Sandra has also published many nonfiction articles and books. She is also passionate about helping new writers develop their talent and their work toward traditional or self publication. As such, she has mentored and coached hundreds of new writers and continues to coach dozens to success each year.

Please visit www.sandrabyrd.com to learn more, or to invite Sandra to your bookclub via Skype.

From the acclaimed author of To Die For comes a stirring novel told that sheds new light on Elizabeth I and her court.

Like Philippa Gregory and Alison Weir, Sandra Byrd has attracted countless fans for evoking the complexity, grandeur, and brutality of the Tudor period. In her latest tour de force, she poses the question: What happens when serving a queen may cost you your marriage—or your life?

In 1565, seventeen-year-old Elin von Snakenborg leaves Sweden on a treacherous journey to England. Her fiancé has fallen in love with her sister and her dowry money has been gambled away, but ahead of her lies an adventure that will take her to the dizzying heights of Tudor power. Transformed through marriage into Helena, the Marchioness of Northampton, she becomes the highest-ranking woman in Elizabeth’s circle. But in a court that is surrounded by Catholic enemies who plot the queen’s downfall, Helena is forced to choose between her unyielding monarch and the husband she’s not sure she can trust—a choice that will provoke catastrophic consequences.

Vividly conjuring the years leading up to the beheading of Mary Queen of Scots, Roses Have Thorns is a brilliant exploration of treason, both to the realm and to the heart.

Link to order Roses Have Thorns.